Sunday is my favourite food day because the mess gives chole bature. I love it. While gobbling it up on 13th December, Sunday, the president of our general body handed me over Times of India and pointed to an article in the front page. It was about the suspension of three professors of the institute following complaints of sexual harassment. In my opinion the news was old and it should have been out the very next day the professors were suspended. I was happy that it had been made public at least a week after. There was more to be done, in my opinion. Dismiss all of them for example. 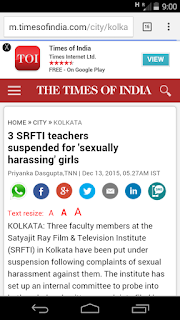 The previous night my next door neighbour had knocked on my door to say that someone from the Times had called her. She seemed to be worried about how the reporter had got her number. She said that she wanted to let the general body know of this matter. We went to the general secretary to let him know. I wanted to know if anybody had spoken anything about what had happened in the institute in the past one month. It needed to be spoken about and i didn't understand why everyone was shying away from speaking to the press. I would have spoken had someone called me. Pretty soon i got to know what the reasons for the silence were.

The first reason was that the inquiry regarding the complaints was going on and with the suspension of the three professors there was a sense of peace prevailing on campus. I do not agree with this. This peace is a fool's paradise. By shutting up about things which are shameful we are not extinguishing the shameful things itself. We are just hiding it and it only favours the predators and perpetrators of crime. Yes. These are crimes. Like murder. Like rape. Rape.

The second reason which was stated was that the reputation of the institute will be tainted and the public could make use of the current situation in FTII and now this in SRFTI to shun film schools altogether. Wow. So we will be happy in our 50 acres of government land and make films which have its roots in gender inequality, oppression and abuse. May be i am not an artist. I do not think that this what is happening here in the name of art makes any sense. If that makes me a bad artist, a blacksheep, an attention seeker, 'mad from the beginning' etc, i am only happy. I am all that. With pride.

Later the matter was posted in one of our WhatsApp groups where a lot of students interact. I was shocked to see the responses of the student community. One of them said 'SRFTI in TOI front page today. I don't see front page news when student films get awards'. Insensitivity couldn't have found a better abode. 'Heartbreaking' someone said. 'Noooo', another. Just one person said that may be it was 'heartbreaking, but necessary'. I was sick of having to babysit adults in politics. So kept mum. What is heartbreaking is that sexual harassment continued so long. What is heartbreaking is that nobody cared. That it took such a long time to even revive the internal sexual harassment committee.

Pretty soon i saw that one student who had been prohibited from entering the campus following a sexual harassment complaint was commenting there innuendos and all. My head started reeling and i blurted out at him. Can we ever prohibit abusers from entering digital spaces?

Well, people have already started murmuring that it was me who tipped the press off. I have no comments on this. When the media reported our ragging issue in first year they said it was me. This year the institute sat smug protecting itself from the police complaint which had been lodged against ragging. About the Inquiry committee report on which no action was taken.
I would like to make myself clear one more time on this occasion. Sexual harassment is not okay. The reputation of the institute should be tainted if there is sexual harassment on campus. It's not one, three professors have been suspended. The complaints are not a couple, but many. Parents will be worried? That is the whole point. They should be. Everyone should be worried to send female students to a space which encourages sexual harassment and on top of it nurtures a student culture of hushing matters up because it doesn't sound good. Well to get molested, raped and abused don't feel good either. So cut the crap, people, grow up and let the world know of injustice and how it was battled.
at December 13, 2015

Sula
by Toni Morrison
Not one of the best by the author. In the foreword Morrison explains what she had tried to achieve while writing 'Sula'. Reading that will help get a clearer perspective. Friendship between women, the bad woman and the good woman, and ...

The Bluest Eye
by Toni Morrison
The Bluest Eye scrutinizes internalization of white beauty. A must read especially in the indian context of caste and the idolization of the colour white. Starting with this one which i recently re-read, i will be trying to substantiat...
tagged: re-reading

Shakeela Athmakatha
by Shakeela
It is important to know what the actor has to say about herself. She has some interesting insights on men, especially the quintessential malayalee male.

Waiting for the Barbarians
by J.M. Coetzee
Bullshit